Netflix gets nine Capri Awards including Del Toro’s ‘Pinocchio’, ‘Glass Onion’, ‘All Quiet in the Western Front’ as well as Ana De Arana for “Blonde” and Alejandro G. Inarritu for his visionary “Bardo”.

Warner Bros.’s King of Rock biopic “Elvis” was named Best Film and Baz Luhrmann received the Best Director Award at the 27th edition of ‘Capri, Hollywood – The International Film Festival’, the annual event founded in 1995 by producer Pascal Vicedomini and organized in association with Capri in the World Institute. The Awards were announced on the festival’s closing day at the prestigious Mercandante Theatre in Naples during the Gala sponsored by Intesa Sanpaolo, Terna and Givova: ‘Honoring Cinema Masters.’

Prizes for the best performances of the year were also given to Brendan Fraser (Best Actor for “The Whale”) and Angela Bassett (Best Supporting Actress for “Black Panther: Wakanda Forever”).

“Everything Everywhere All at Once” earned as Best Original Screenplay Award (Daniel Kwan & Daniel Scheinert). Regarding other technical prizes,

“Tell It Like a Woman” theme song “Applause” by Diane Warren was selected as Best Original Song.

The Capri Master of Cinematic Art Awards were presented to director Liliana Cavani, Michele Placido and Franco Nero while the “A Life for Cinema Award” was feted to Aldo Signoretti (Elvis) and another “Visionary Award” was presented to actor-director and producer Luca Barbareschi.

“European Director of the Year” was named Ruben Östlund for “Triangle of Sadness” while “Best European Actors of the Year” are Riccardo Scamarcio (“Caravaggio’s Shadow”) and Emma Thompson (“Good Luck to You, Leo Grande”).

Capri, Hollywood, the ‘bridge’ festival connecting the Italian and Global movie industries is organized under the patronage of the Mediterranean Parliamentary Assembly and with the participation of RS Productions, Nuovo Imaie and Isaia. 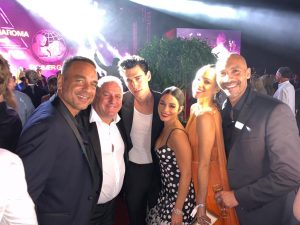 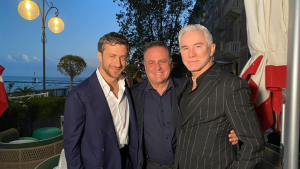 HERE IS THE COMPLETE LIST OF 2021 CAPRI AWARDS. OSCAR WINNER® JANE CAMPION’s ‘THE POWER OF THE DOGEST PICTURE AND PAOLO SORRENTINO HONORED AS...

HERE IS THE COMPLETE LIST OF 2020 CAPRI AWARDS. ‘THE TRIAL OF THE CHICAGO 7’ NAMED BEST PICTURE AND CHLOÉ ZHAO HONORED AS...

Copyright © 2020 Capri In The World Institute | Tutti i diritti riservati.