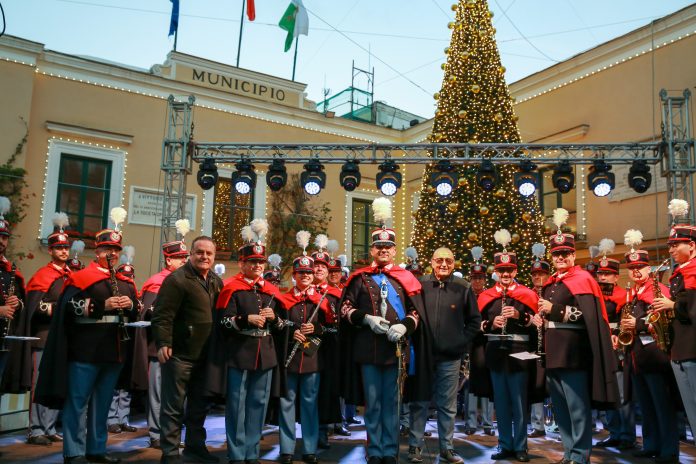 With the awarding of the Humanitarian Award to the Italian Army Band the 27th edition of “Capri, Hollywood – The International Film Festival” kicked off on the Blue Island.

Presenting the award, after the applauded performance of 40 elements on the stage of the Piazzetta, was Tony Renis, honorary president of the Capri in the World Institute.

With him was Pascal Vicedomini producer of the event, which this year has chosen the slogan ‘cinema, love, and solidarity and is organized with the support of the DG Cinema and Audiovisual of the MiC, the Campania Region with Intesa Sanpaolo, Terna, Givova, Rs Productions (until Jan. 2, final gala at the Mercadante Theater in Naples).

Free screenings kick off at the Auditorium in Capri and Cinema Paradiso in Anacapri for a total of 230 titles including feature films, documentaries and shorts, previews and reviews, in competition and out of competition, selected from about 90 countries, 160 of which can be enjoyed on the Mymovies. it and Eventive.org platforms There were 1400 registrations that the ‘Capri Special Contest’ received on the international Filmfreeway.com platform.

The classic appointment of the ‘Capri Symposia’ in the Dieffenbach Hall at the Charterhouse of San Giacomo will be a daily opportunity for discussion among guests, particularly in this edition on humanitarian issues.

Tomorrow they will discuss “Cinema, youth and respect for civil rights: for an inclusive future.”The documentary section is also very rich with the premiere of “A Little War Story” by journalist Daniele Piervincenzi (Capri the Humanitarian Award for his civil commitment and TV reportage), “Ennio Flaiano. Straniero in Patria” by Fabrizio Corallo and Valeria Parisi on the occasion of the 50th anniversary of his death, “The Lost Beauty – La bellezza perduta: Siria” by Roberto Burchielli with Raoul Bova, the first episode produced in collaboration with the Italian Red Cross.

HERE IS THE COMPLETE LIST OF 2021 CAPRI AWARDS. OSCAR WINNER® JANE CAMPION’s ‘THE POWER OF THE DOGEST PICTURE AND PAOLO SORRENTINO HONORED AS...

HERE IS THE COMPLETE LIST OF 2020 CAPRI AWARDS. ‘THE TRIAL OF THE CHICAGO 7’ NAMED BEST PICTURE AND CHLOÉ ZHAO HONORED AS...

Copyright © 2020 Capri In The World Institute | Tutti i diritti riservati.